The Importance of a Good Design in the Lifecycle of Projects

The Importance of a Good Design in the Lifecycle of Projects

We live in a complex world marked by constant changes, which forces the different types of mindset to take quick decisions and to adapt to survive. This trend can be represented by an acronym, embedded in the jargon of defense, which translates this scenario: the “VUCA” – volatility, uncertainty, complexity and ambiguity). The term may be appropriate for the management of projects, which often deals with problems which are volatile, uncertain, complex and ambiguous.

In this context, the pressures for quick results and acquisitions of technology by opportunity make the initial stages of the lifecycle for the execution of a project to be neglected. And the consequences can be devastating, from expenses many times higher than those originally envisaged, until the complete unfeasibility of a project, with the creation of the so-called “white elephants”.

In the face of this growing complexity, the reduction of the risk associated to the stages of a project become of vital importance. So, before kicking off, a thorough analysis of its lifecycle is necessary, which includes the stages of design, requirements, architecture, development/production and operation, until its service is withdrawn/disposed.

This strategy is crucial in the context of complex projects, in which a systemic vision is necessary, materialized in the methodology of systems engineering – which goes far beyond the technical vision. Applied in a vision of Systems-of-Systems, it presents itself as the ideal methodology for the design and development of complex projects, because it analyzes the integrated form of all of the components and stakeholders. In this way, a better global result is obtained than that which would be obtained by applying the traditional management strategy.

It is a holistic approach, based on a high-level view, which allows you to implement and analyze systems composed of heterogeneous, complex and independent elements, to be integrated in a cooperative and effective manner. But, to be successful, it is necessary to focus specially on the initial stages of conception and resist focusing exclusively on the stage of development and production.

To illustrate the importance of the initial stages of the lifecycle of projects, I would like to reference a study prepared by the US Department of Defense (DoD). Based on the history of several projects executed, the DoD has undertaken a study of the costs during its lifecycle, which is presented in the graph below. Special attention was given to the moment in which decisions are made, which define the costs of the project and also the impact of corrections applied, when they are considered in different moments of their lifecycle.

In this graph, the total cost includes the costs incurred from its conception until its withdrawal from service, accumulatively. The stage of design, architecture and requirements, as indicated in the graph, represents 20% of the total accumulated cost of the project.

Definition of cost of the Life Cycle 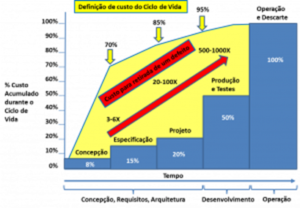 Re: adapted from the Incose Systems Engineering Handbook

The graph also highlights the moments in which the costs are defined, represented by the yellow curve. These moments represent the definition of the technologies to be used, the means of integration to other systems, logistical aspects, human capacities and facilities required for its entry into operation, maintenance and evolution throughout its lifecycle, until withdrawal from service. Through the graph, it can be observed that only the design stage determines 70% of the cost of the lifecycle of a project/program. The other 25% are defined in the steps of requirements and architecture. Thus, 95% of the costs are defined before the start of production. Significant, right?

These aspects assume a more important role when we realize that a lousy definition or an incorrect requirement will represent a correction of direction for the project in the future. These adjustments involve costs for the correction of a defect or error in the specification of the system. Taking as reference a symbolic value of “1” for the cost of correction of a defect during the stage of design, this cost will be exponentially greater if the same defect is detected in later stages of the life cycle. If this defect is detected in the production phase, the cost for its correction will be around 500 to 1000 times greater than if it were detected in the phase of design. This represents a hidden cost in the lifecycle of a project that can lead it to never be completed and will certainly result in a final cost much greater than originally foreseen in the budget. Therefore, even though we have inputs considered urgent, we must take due care with the initial phases of definition of a new solution or system, and work with the methodology of systems engineering for increased efficacy of projects. The apparent N. of R.: Eduardo Marson Ferreira is president of Fundação Ezute. The high initial cost for the definition of the solution will certainly avoid, in the course of the project, hidden costs that may lead to the complete failure of an initiative.